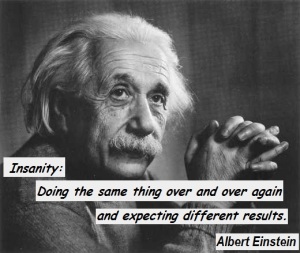 I went to visit a friend today. When I arrived, he was visibly upset and frustrated.

He explained that his toilet wasn’t working; that he had gone out and purchased new parts and replaced the entire ‘inside’ workings of the toilet; and it STILL WASNT WORKING! He was PISSED OFF! He walked away feeling defeated.

After a break, he calmed down enough and went back to TRY again. He said that when he returned, he noticed that the PROBLEM was NOT with the parts he had just spent two hours replacing, but rather the flush handle/arm and chain 😡 (that’s a different/separate part altogether for those not in the know 😊).

He immediately went from zero to PISSED OFF…again;

(how did I not see that before I replaced EVERYTHING else)

(how could I be so stupid)

So off to the store, AGAIN, to get the RIGHT part THIS TIME!

He thought to himself, “lefty loosey righty tighty”, as he began to remove the plastic nut. With that, using his pliers, he turned left (counter clockwise) on the nut. Nothing! It wouldn’t budge…WTF…as he REALLY put his weight into ‘loosening’ the F**KING NUT! After several more failed attempts and a substantial increase in his blood pressure, he was defeated again.

He walks away and opens the package with the new handle. If he inspected the new handle, he thought, he might be able to figure it out. As he looked at the new handle and compared it to the old one (still firmly attached to the toilet); they were identical! Finally some HOPE.

He decided to remove the plastic nut from the new handle, hoping for some insight into removing the old handle. “Lefty loosey righty tighty” he thought as he grasped the nut and twisted it with his hand…NOTHING…it wouldn’t budge! F**K, F**K, F**K!!!

It’s at THIS point that I arrive at my friends house.

After calmly listening to him RANT/VENT/TIRADE; he asked for my help. I smiled and said ‘OF COURSE 💜’.

First I asked him to take a few deep breaths; TOGETHER, WE could do this…

As I looked at the situation, from my OWN/NEW perspective, a memory immediately came to me, a time when I myself had been in the same situation.

Exceptions to the ‘RULE’! I smiled and was grateful for SEEING beyond the task at hand and allowing myself to listen and hear this message.

You see, the plastic nuts on toilet handles are an ‘exception’ to the ‘lefty loosey righty tighty’ RULE! I took the pliers, twisted right (clockwise), and Voila; plastic nut DEFEATED!

My friend stood there, dumbfounded. After a moment we both began laughing hysterically. Problem Solved! SIMPLE! He confessed he had never even considered turning the nut clockwise. THAT was against the RULE(s) 😁

And now to the point…finally 😊

There is always more than one way to look at situation, but when our ‘automatic thinking brain’ takes over, and we refuse to consider other options; rules and beliefs become our guide; we close ourselves off from hearing that little voice that says ‘I  before E except after C’.

When you get stuck, frustrated, or just plain PISSED OFF; STOP and BREATHE. Step away for a minute and just BREATHE: calm down; relax.

There is always more than one way to do something; look at something. When you’re able to calm down and look at the situation subjectively, for what it really is, you’re then able to hear the little voice that says ‘I before E except after C’; and that’s personal growth!